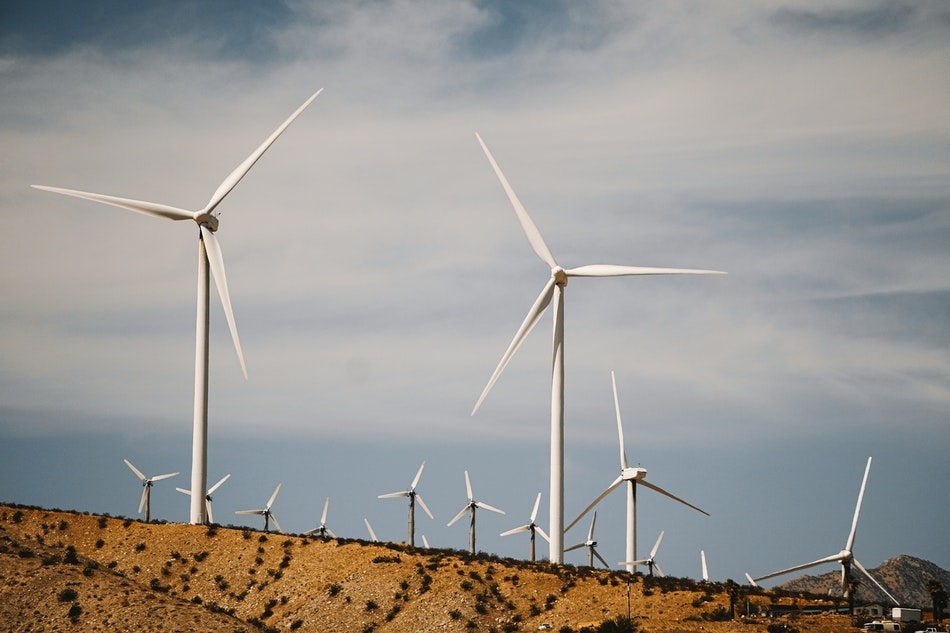 Wind energy is the conversion of the kinetic energy of the wind, by the use of wind turbines, into mechanical energy which is then converted into electricity.  Mechanical energy is simply created when the wind turbine blades spin and a generator is turned, thus producing electricity. The result is a green renewable energy ready for us to use. The wind renewable energy, compared to conventional energy produced by installations such as coal, oil and natural gas, produces no greenhouse gas emissions or other harmful emissions during operation.

Wind turbines sit on top of towers at around 80-100m high (offshore wind turbines are even higher) in order to take advantage of the higher and more constant wind speeds usually found at higher altitudes (due to the reduced influence of drag). The blades begin to spin when the wind reaches 7,5-9,5 miles/h and keep spinning up until 50-55 miles/h at which point the wind is considered too strong. The ideal location would be a place with constant wind flow free of turbulences or other powerful wind bursts. Modern wind turbines blades are controlled by computer controlled motors and are optimized so that they always face the wind irrelevant of its direction, thus sustaining high performance for longer periods of time.

United States is the leader in the deployment of onshore wind energy installations, whereas Europe is the leader in the deployment of offshore installations. The largest onshore installed project is the Roscoe Wind Farm in US consisting of 627 wind turbines in an area of 400Km2 producing a total of 781,5MW. The largest offshore installed project is the Thanet Offshore Wind Project in the United Kingdom with 100 wind turbines, located 11Km from the shore covering an area of 35Km2 and producing a total of 300MW.

An alternative to the horizontal axis wind turbines described above, are the vertical axis wind turbines. In vertical axis wind turbines the rotator shaft is perpendicular to the ground and as a result they rotate around the vertical axis. There main advantage is that they do not need to face the wind direction in order to spin (they are omni-directional) and as a result they require much less complex electronics and moving parts and consequently they are cheaper to build. Due to there structure, they are ideal for location where there is a slow and high variation wind flow and in locations where there is limited space as they can be placed next to each other at much less distance than the corresponding horizontal axis wind turbines. Their main disadvantage that makes them less favorable is that, for the time being, they are less reliable. To be more specific, they stall during short bursts of high speed winds and their blades are easier to crack due to increased stress on them as a result of the vertical spin of the blades.

The main advantage of wind power is apparent to all. It is the production of electricity from natural resources, without any impact on the environment (greenhouse gas emissions), in an effort to become more self-sufficient and improve sustainability. The main drawback of the wind energy is the level of noise created from the wind turbines when they spin in order to produce electricity. This drawback is mainly related to the onshore wind farms particularly in densely populated areas. However, in modern wind turbines the level of noise created from the mechanical parts has been largely reduced leaving only the aerodynamic noise created from the rotating blades. The other major drawback is related to the negative visual impact the wind turbines create in an area. For the offshore installations this drawback is affecting only touristic areas, largely because all offshore installations are near the coast (in less than 30m water deep).