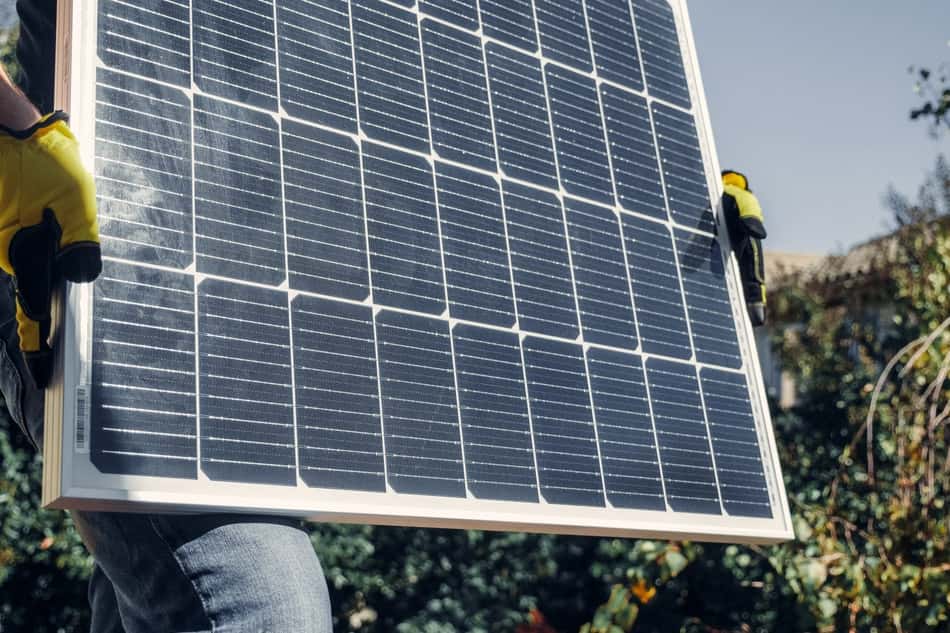 Photovoltaic (PV) technology involves the use of semiconductor devices to directly convert solar radiation into electricity. This technology uses solar panels made up of several solar cells having PV material. There are various semiconductor materials used to make a PV system including: silicon (monocrystalline, polycrystalline and amorphous) silicon and cadmium telluride among others. The total energy produced by a solar panel depends on factors like type of collector, the prevailing weather conditions, and the tilt angle of the collector, the azimuth angle of the collector and the level of sunlight.

Since the generated electricity is direct current, inverters must be used to convert it to alternating current. Fig. 1 below shows the main components of a grid connected PV System.

PV panels are extremely affected by shading. For instance, shading of a small portion of the panel makes the portion unable to collect the solar radiation. Moreover, shading of an individual cell makes the affected cell, to develop substantial amount of resistance to the current flow leading to power dissipation.

A PV System has several components that include: PV arrays that covert the solar energy to electricity, inverters that convert direct current to alternating current, wiring, mounting apparatus, combiner boxes and monitoring apparatus among others.

Solar energy is very promising for countries where sunny climate is experienced throughout the year. Electrical power generation from PV is still limited in sunny countries because it is relatively expensive. However, the situation has greatly improved since Authorities have introduced the renewable energy subsidies schemes. Under this subsidisation scheme, governments usually subsidise 55% of the PV system installation cost, and the Electricity Authorities buy the generated electricity sold to the grid at a higher price than the cost of electricity.  However, PV application is still limited to small-scale basis.

PV energy is an established and rapidly expanding energy sector. PV technology is among the renewable energy technologies that experts are predicting that they will help the European Union (EU) achieve its 2020 goals of obtaining 20% of the energy from renewable sources. The main advantages of PV technology is the low lifecycle Greenhouse Gas (GHG) emission, it is environmentally friendly, a longer design life of more than 25 years among others. Recent advancements in the technology have led to substantial increase in their efficiency and reliability as well as decrease in price. Improving the PV efficiency while at the same time lowering the costs, are the two main challenges facing by experts in this field. These limitations must be minimized in order to encourage commercial adoption of this technology. Generally, the efficiency of a commercial solar module is about 15%. This means that 85% of the sunlight hitting the module is wasted. By the end of the year 2010, over 38 Gigawatt (GW) of PV power systems had been installed worldwide.  These systems have the annual production capacity of about 40 Terrawatt-hour (TWh). Europe has the highest PV power production capacity with 25GW PV power systems installed.

At about 80% market share, crystalline silicon cells take the largest market share of solar cells market. They are manufactured from slices cut obtained from monocrystalline or poly-crystalline silicon crystals. Crystalline silicon is readily available, its reliability is outstanding and its physical characteristics are well understood.  The efficiency of these solar cells lies between 13 and 22%. The remaining 20% of the market share is taken by various thin film technologies, which are manufactured by laying down thin layers of a PV material on base material like glass. Thin film technology has the ability to lower the manufacturing cost of solar cells but limited research has been done on a commercial level. Moreover, the low production cost is cancelled out by the relatively low efficiency of 4 to 12 %.

The performance of a PV cell is determined by its efficiency to convert solar energy into electrical energy. The payback time of a PV installation depends on the area of installation. For instance, countries in southern Europe like Cyprus, or countries like Israel, the payback period ranges from 1 to 2 years. This period increases with the increase in latitude.

The Economics of Photovoltaic

Wide scale commercial application of PV based electricity developed very slowly from the 1970’s. The reluctance to apply PVs was attributed to the high generation cost due to high cost of the systems. During this period, PV electricity cost was approximately 23.235 €/kWh. However, this cost has been reduced significantly. This reduction in cost is attributed to the technical advances, the learning outcomes in production techniques as well as advances in semiconductor physics.

In spite of the economic crisis, the market for PV energy in 2010 increased by 65% when compared to the 2009 market. The EU predicts that PV energy will provide over 12% of its total power consumption by 2020. The study in European PV Industry Association assumed that the market was characterized by competitive development prices hence the range of generation costs obtained reflected those of a mature market. From the data, the PV electricity generation cost was found to be 0.239 €/kWh and in 2011 they reduced to 0.203 €/kWh. The projection for the cost of electricity is shown in Fig. 2 below.

The projection of electricity generated from Photovoltaic

Current prices of PV systems are greatly influenced by government support initiatives and do not represent the actual system cost. Developers of crystalline-silicon PV systems and thin film PV systems have put in place their own strategies to reduce the cost of the systems.

The main hindrances to wide-scale of PV Systems are either administrative or regulatory and mainly related to the access to the grid. Although PV Systems have very low operation costs and they are associated with higher investment costs than the conventional electricity generation technologies. As a result, capital costs take the largest proportion of the PV electricity costs. Other technological and economic barriers that limit the expansion of this technology include the incorporation of the system in the existing electricity grid, development of more efficient and cost effective manufacturing costs and limited number of experts among others. The problem of silicon purification that troubled PV developers is no longer valid. Currently, only off-grid application of PVs is competitive to conventional sources of electricity particularly in remote areas where the cost of grid connection is prohibitive. Some of the applications where PV electricity is competitive with conventional electricity include water pumping for irrigation purposes, security lights, electric fences for game parks among others.

Another important consideration of a PV System is the economic aspect. The economic aspect of this technology revolves around the total installation cost, payback time, the price of electricity and feed-in- tariffs. The cost of a PV installation is expressed as price per peak-watt (€/Wp), where, peak watt is the power at standard conditions i.e. solar irradiation of 1000 Watt per metre square (W/m2), air mass of 1.5 and 25 degrees Celsius (0C).  The system costs include both module and balance of systems. Module costs account for about 40 to 60% of the PV system costs.

In order to determine the cost per kWh of the generated electricity, the total generated energy of the PV system must be determined and several parameters must be considered including:

• Performance ratio: Due to factors like shading, a PV system does not generate the full rated capacity. Hence, it is assumed that a residential system generates 75% of its rated capacity while large commercial installations generate 80% f the rated capacity.

• PV System module degradation: the deterioration of the system affects its performance during its lifetime. The generally accepted guideline is that the system will have 80% of its initial performance after a design life of 25 years. However, this lifetime is expected to increase due to technological advancements.

According to the study, the European PVs will reach an attractive generation costs within the next 10 years, where all market segments had considered. Fig. 3 s. hows the Levelized Cost of Electricity (LCOE) range projection by 2010-2020, for different types of European PVs.

The most common PV systems in the market are made from crystalline silicon. During the manufacture of crystalline silicon solar cells, large purified and purified silicon wafers are utilized. A lot of energy is required to purify and crystallize silicon. A part from purification and crystallization, other processes that require large energy inputs during manufacturing are slicing the silicon into wafers, cutting the silicon into wafers, forming cells from the wafers, assembling the cells and the overall energy requirements for the plant. Since PV industries crystallize various types of silicon obtained from the microelectronics industry, the estimates for the energy consumed in the manufacturing process vary. Hence, calculations for the payback period also vary. However, the advances in PV industry may enable the industry to manufacture its own silicon. In anticipation of this progress, several assumptions must be made during the calculation of the payback time for these modules.

The most common literature on calculation of PV systems payback time is Alsema’s work. He evaluated previous energy analyses but he did not consider the energy consumed to crystallize the microelectronics scrap.  He made credible estimates for the energy required to manufacture different types of frameless PV systems. For instance, he estimated that in order to manufacture a mono-crystalline silicon module will require 600 Kilowatt-hour per metre square (kWh/m2) and 420kWh/m2 for a multi-crystalline module. He assumed a standard conversion efficiency of 12% and an annual available solar irradiation of 1700 kWh/m2. After making these general assumptions, he determined a 4 year payback time for the existing multi-crystalline silicon PV systems. However, he estimates that in the coming 10 years the industry will be using solar-grade silicon that will increase the efficiency to 14%.

The above energy payback figures vary from those obtained for thin film PV modules. Unlike their crystalline counterparts, thin film PV modules consume a small quantity of semiconductor material. Apart from the general energy requirement for the plant, energy is required in manufacturing the substrate as well as the deposition process. With reference to amorphous silicon, Alsema estimated that it requires about 120kWh/m2 to manufacture an advanced frameless PV module. An additional 120kWh/m2is required to make the frame as well as the support of rooftop-mounted systems. Alsema assumed a conversion efficiency of 6% and an annual solar irradiation of 1700kWh/m2 during the calculation process. The results showed that current thin film PV modules have a payback of about 3 years. On the other hand, Kato and Palz obtained the paybacks for amorphous silicon PV system to range between 1 to 2 years. Alsema had estimated that by removing the frame, minimizing the use of aluminium, having a higher conversion efficiency of about 9% and incorporating other advancements, the payback could reduce by 1 year.

CuInSe2 and CdTe PV modules have efficiency values ranging between 9% t o 12%. This means that their payback should be less than a year. Rooftop PV systems are able to provide more than 30 years of clean energy with a payback period ranging between 1 to 4 years. However, the support structures used in ground-mounted systems can elongate the payback period by 1 year. Fig. 4 and Fig. 5 show energy payback for various rooftop PV systems.

As a concluding remark, we can say that PV panels will continue to be improved in all aspects including the efficiency factor and this will make them more attractive and their use will be cost effective. Solar energy is a renewable energy source which needs to be fully exploited and has a great potential.