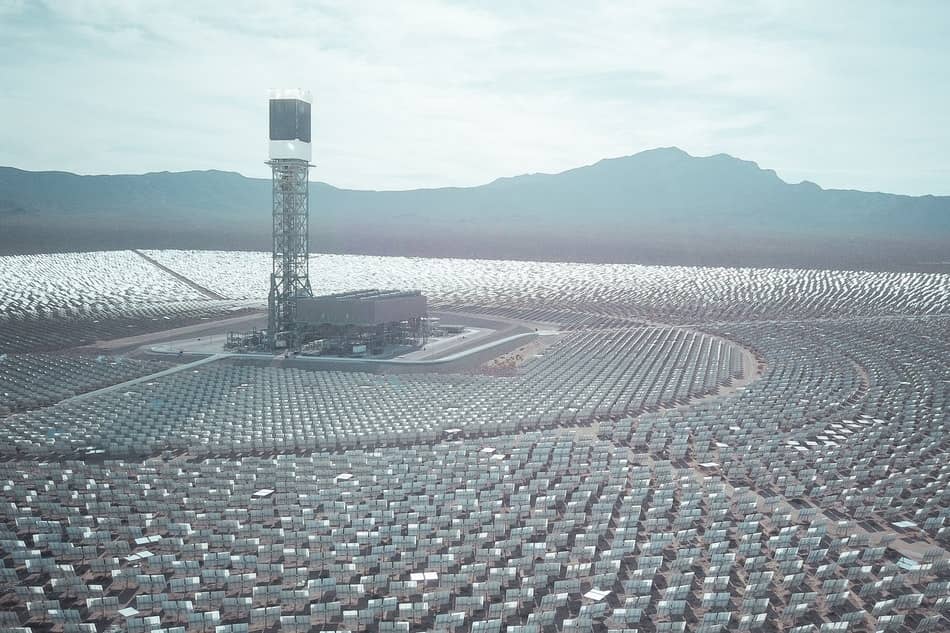 Solar energy storage can help increase the mix of solar systems, CSP and PV, and wind energy systems in the generation of electrical power; solar energy companies with experience in both CSP and PV systems are expected to benefit most.

According to latest research from US DOE and the US National Energy Laboratory (NREL), solar Photovoltaic (PV) panels and Concentrated Solar Power (CSP) may not necessarily be ‘rival’ solar energy systems. The integration of Concentrated Solar Power (CSP) systems with solar-energy-storage, specifically Thermal Energy Storage (TES), can actually enable higher penetration of solar PV systems on the power grid.

CSP & TES systems can store thermal energy for a period up to 15 hours; thus improve flexibility of the grid and facilitate towards higher penetration of solar energy systems on the power generation network. CSP with TES can be used for increasing the reliability of, what was up to now a ‘rival’ technology, Photovoltaic (PV) systems.

CSP systems use reflectors to concentrate solar radiation and absorb solar heat, then store it and use it to produce electricity by driving a steam turbine and turning a generator.

Up to now, comparison of CSP vs PV systems would show high competition between the two types of solar systems, each opting for a share of the power market. What recently gave a market boost to Photovoltaic (PV) panel companies was the substantial price drop in PV panels. This has not only boosted PV panel sales but, compared to CSP energy prices, it has also influenced several planned investments in CSP projects eventually turning them into PV projects (around 3GW of CSP projects in the US have been converted to PV). Now, NREL investigators Paul Denholm and Mark Mehos say that, CSP coupled with Thermal storage may hold the key to increased penetration of renewable energy sources such as solar PV and wind in power generation. However, their theory is still subject to further refinement through simulations with utility scale software that, amongst others, take into account intermittency of the input sources.

Renewable energy sources such as solar energy and wind energy are, by nature, unpredictable, intermittent and periodic, subject to environmental conditions(e.g. night and day) and climatic changes, (fluctuations of wind and sun – clouds, rain, wind blowing etc.). Thus generation of energy from renewable energy sources is intermittent, unpredictable and, consequently, unreliable especially when used directly on to the power grid.

Looking at typical energy demand patterns (load curves), it is evident that energy demanded does not coincide with the energy supplied by renewable sources (especially solar and wind). The US electricity demand usually peaks between 16:00 and 20:00 which illustrates the gap between energy demand (e.g. at peak) and energy supply from renewable sources (RES)  –e.g. for both solar energy systems, photoelectric power generation – (PV) panels and solar-thermal power (CSP).

A better example of the mismatch between energy demand and renewable energy supply is during the summer night, especially in hot climates, where energy demand for cooling (e.g. air-conditioning) is at peak while there is no sunlight for direct solar energy generation. To compensate for this energy gap, energy storage is of ultimate importance; thermal energy storage is a key factor for storing excess energy produced during the day (or when renewable energy sources are available) and dispatching it during the night as demanded.

Similarly, energy gaps that may also occur during the normal ‘energy generation hours’, e.g. gaps due to sudden obstruction of the sun by clouds or when wind suddenly stops blowing, can also be moderated through solar-thermal energy storage (TES) given the ‘indirect’ way of generating energy. Consequently, storage of solar-thermal-energy can substitute expensive conventional spinning reserves that would otherwise be required to compensate for the unpredictability of renewable energy sources.

According to scientific evidence, grid flexibility and response time are crucial factors for system stability; i.e. how quickly the system can respond to, or get influenced by, variations of the input sources –e.g.solar and wind. As more renewable energy sources penetrate into the power grid, the more vulnerable the system becomes to input variations; these variations force the system to ‘dump’ renewable energy off the grid in order not to jeopardize the system’s stability. Renewable energy is literally wasted (thrown off the grid) resulting in lower system efficiency and increasing the required capacity of ancillary service.

What research state is that, CSP systems have the potential not only to overcome problems of the sudden variations in solar radiation (e.g obstructions from sudden passing clouds) but also to store energy for longer periods filling gaps between night and day. The former is facilitated by the thermal inertia acting as a dumper of the effects of sudden solar variations (transforming the sudden change to a more ‘gradual’ thus avoiding sudden ups and downs in solar output (a problem in PV applications) while the latter by the prolonged storage ability to solar-thermal-storage (e.g. up to 15 hrs).

Essentially what NREL investigators state is that the value of CSP is not in any reduction of the direct cost of CSP but rather to the increased penetration of ‘intermittent’ renewable sources on the grid. The actual benefits come from better dispatchability of CSP with storage, increased capacity and reduction in energy waste. At an estimated penetration of solar energy of around 10%-15%, investigators suggest that CSP with TES can yield a 50% reduction of curtailment of solar photovoltaic (PV) energy; consequently, in this way the cost of energy is reduced.

The figure above illustrates how PV combined with CSP and storage can reduce solar curtailment and contribute towards reduction of the overall energy cost.