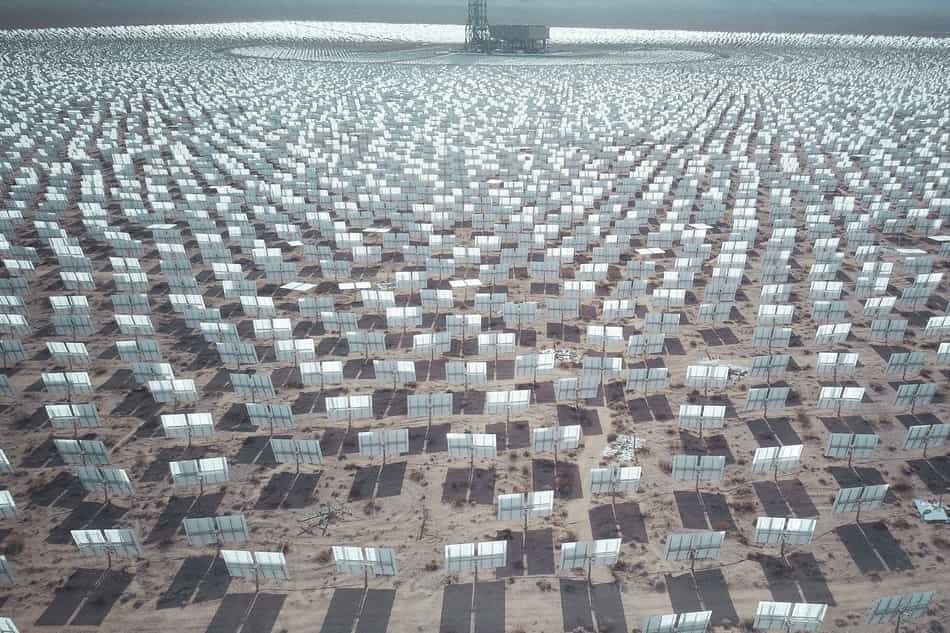 Concentrated Solar Power (CSP) is a technological application that explores Renewable Green Energy (solar power) to generate electricity. CSP systems use mirrors to concentrate solar sunlight and collect thermal energy to heat a working fluid to high temperatures in the range of 250 C° up to 1000 C°. The hot liquid (usually oil or molten salts) is used to generate super-heated steam to drive a generator through a heat engine (steam turbine). The generator is the system that generates electricity.
CSP system installations are one of solar energy systems that have had a widespread commercialisation in recent years with an installed global capacity in the range of 1 GW as of 2010 and a projected estimated installed capacity beyond 5GW by the end of 2012 (five times more than in 2010). Considering current research activity and recent developments aiming at reducing Concentrated Solar Power and Energy Storage costs, CSP technologies are expected to become highly competitive in the power industry in the near future (by 2015 – 2020).

The terminology “Concentrated Solar Power”, or Concentrating Solar Power, is used because a large area of reflected sunlight is concentrated through mirrors and lenses onto a small area to produce high temperature for a thermal power plant. There are four (4) main types of CSP systems namely parabolic troughs, concentrating linear reflector systems, dish Stirling systems and Concentrated Power Towers which utilise sun power to heat a working fluid and drive a turbine, as in a conventional power plant. Each of these technologies has different system attributes, such as working temperature levels, system boundaries and efficiency levels and associated investment and operating costs.

To gain a basic understanding the main CSP systems are briefly described below:

A parabolic trough, by tracking the sun along daytime, concentrates sunlight onto a receiver tube containing a working liquid (usually molten salts) that runs along the focal line of the reflector. The fluid is heated to a temperature between 150 C° and 380 C° and it is used to drive a heat engine and a generator to produce electricity. Parabolic Troughs are currently the most popular amongst CSP systems. Nevada Solar One project – Boulder City and Plataforma Solar de Almeria in Europe (Spain) are representative installations of parabolic troughs.

Similar to parabolic troughs, concentrating linear fresnel reflector systems (CLFR) use multiple flat mirrors to concentrate solar sunlight onto the receiver tube. The same concept applies where liquid fluid running in the heated tube is used to boil water and drive a steam turbine which turns a generator.  Although linear reflector systems are not as efficient as parabolic mirrors, they are more cost effective.

Dish-stirling systems can achieve higher temperatures than parabolic troughs or CLFR systems as they concentrate solar thermal energy onto a single point situated above a reflector dish. Dish Stirling systems look similar to TV satellite dishes, but they are made of curved mirrors and lenses. The dish can be connected either to a steam engine (as in previous modes of CSP already explained) or to a Stirling-engine converting heat energy (temperature difference) to mechanical work and then to electricity through a generator. Dish strirling systems, due to the fact that they achieve higher temperatures at a single focal point they are more efficient at converting thermal to electrical energy.

Concentrated Solar towers are capable of achieving temperatures over 550 C° and up to 1000 C°. An array of thousands of sun-tracking reflecting mirrors (heliostats) positioned in a field area concentrate solar radiation (solar thermal energy) to a single point on the top of a power tower erected in the middle of the reflectors. Tower height can reach 50 to 80 mts above the ground, though future Tower designs make reference of taller heights. The heated working fluid in tower-power designs are usually stored in massive thermal storage tanks for powering thermal engines and electric generators when electricity is demanded.

Concentrated Solar power towers, as the one located in Seville, Spain, may constitute the future of solar electricity generation. Provided that initial massive investment can be compensated by economies of scale, CSP towers can greatly contribute to shifting from ‘dirty’ coal fuels to renewable green energy sources.